How to Impress an Aussie Guy 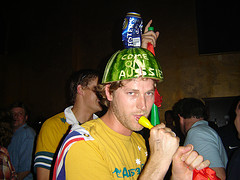 There’s an old joke about impressing an Aussie male that ends with the punchline, “show up naked with a 6-pack of beer”. And so as not to incur the wrath of my Aussie brethren, I’ll say nothing that suggests that this is a bad idea.

But if streaking on a first date is not your cup of tea, then perhaps these tips will get you where you want to be with the hunk of blond surfer dude you spied at the Coogee Beach Hotel.

Play Up Your Own Accent
Australians love to travel so if your Aussie dream boat hears an accent, he’ll almost certainly be curious about where you’re from. If you’re American or English, however, be prepared to put up with some good-natured piss taking.

Take an Interest in Sports
Unless you stumble upon that rare breed of Sydneysider (that’s becoming more popular by the day it seems) that spends more time in front of the mirror than the Queen from Snow White, the Aussie male is a sports fan. It’s not necessary to take a crash course in the history of Rugby or Aussie Rules football, though. A few simple remarks about how you don’t understand the rules at all should be enough to get the hunkmeister talking your ear off.

Learn the Lingo
A few viewings of Crocodile Dundee or The Crocodile Hunter should be enough to give you a solid base to start from. But rather than throwing out Aussie slang willy-nilly, a subtle but perfect use of some of the more obscure lingo out there will have the biggest Ocker eating out of the palm of your hand in no time.

Don’t Blush
Colourful language is par for the course when talking to Australians and when you throw in a few beers and a group of blokes, it can get pretty thick. So turn a blind ear to the effin’ & blindin’ and score a few bonus points if you can hold you own.

Drink Beer
No Aussie bloke likes going up to the bar to order a Wildberry Mojito with pomegranate-infused rum, or anything ending with the suffix “tini.” Keep it simple and let him buy you a beer and not only will he get back to your side faster, but he’ll be extra happy you’re so low maintenance.