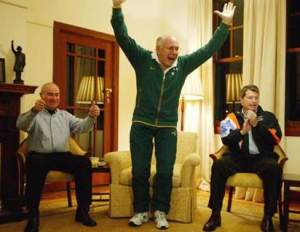 Yes, that is right, it is Prime Minister John Howards 68th Birthday today. For those that don’t know who he is, The Australian Prime minister is equal to the President of other countries, making him the illustrious leader of this glorious upside down island. (he he he…he is the guy in the middle of the photo)
So how will this powerful world leader spend his birthday?
PRIME Minister John Howard will spend his 68th birthday today visiting Australian troops and police helping maintain security in the fledgling nation of East Timor. Mr Howard will also meet with East Timorese President Jose Ramos-Horta, Interim Prime Minister Aleixo da Silva and United Nations Special Representative Atul Khare.
Tomorrow, Mr Howard will head to Bali to meet with Indonesian President Susilo Bambang Yudhoyono and open an eye hospital built by Australia as a permanent memorial to the victims of the October 2002 terrorist bombings.
Not exactly a day off is it?
A few things you don’t know about him:
• He keeps his cricket bats in a corner of his study at Kirribilli House, including the bat his mother gave him on his 21st birthday.
• Won 100 bars of soap as a prize in a 1955 radio quiz show.
• Learnt to lip-read because he had poor hearing.
• Was presented with a small shifting spanner by Dame Pattie Menzies, who told him to “keep working away”. He kept it in his briefcase until he became prime minister.
• Had to undergo daily manipulation therapy on a badly sprained ankle to get through the last fortnight of the 1996 federal election campaign.
See him in a game show from 1955.