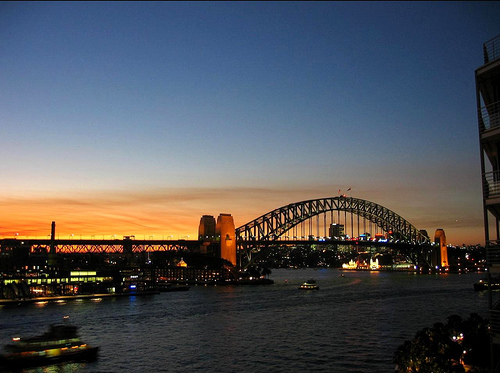 When looking for the best place to stay in Sydney, it really doesn’t get much better than right smack near Sydney Harbour. Sydney Harbour is home to many of Sydney’s attractions like the Sydney Harbour Bridge and the Sydney Opera House. It’s where the Rocks District lies, the ferries to Manly and the Taronga Zoo take off and many shops, bars, restaurants and museums call their home: right next to the lovely body of water that glistens in the Sydney morning light.

Quay Grand Suites Sydney – Sydney
61 Macquarie Street, Sydney 2000 – 5 stars
The Quay Grand Suites is a 5 star accommodation on the eastern section of Circular Quay with prime views of the Sydney Harbour and the Opera House. This hotel was the 2010 Trip Advisor top luxury hotel in the South Pacific.

Sebel Pier One Sydney – Sydney
11 Hickson Road, Sydney 2000 – 4 stars
The Sebel Pier One hotel is a 4 star accommodation in Sydney that was the first to be built out over the water. In fact, the lobby features clear glass floors where you can look down and get a view of the beautiful Sydney Harbour waters.

Sydney Harbour Hotels in The Rocks

Russell Hotel – The Rocks
143 George Street, The Rocks 2000 – 3 stars
The Russell Hotel is a cozy 3 star accommodation in the Rocks where a bit of history makes its way into your stay. The building the hotel is based on dates back to 1887, which adds to the charm one can receive enjoying the Sydney sights from the rooftop garden or while having a nice glass of red at the wine bar.

Holiday Inn Potts Point – Potts Point
203 Victoria Street, Potts Point 2011 – 4 stars
The Holiday Inn Potts Point is a 4 star accommodation in a location in the middle of getting to the CBD or to Bondi Junction. The hotel is located just across from the Kings Cross train station for easy transport options, as well as within walking distance of some of the city’s best nightlife.

Glenferrie Lodge – Kirribilli
12 Carabella Street, Kirribilli 2061 – 3 stars
The Glenferrie Lodge is a 3 star accommodation located in the North Shore suburb of Kirribilli right on the Sydney Harbour. This hotel was chosen by Australian Traveller as one of the top 10 hotels under $100.