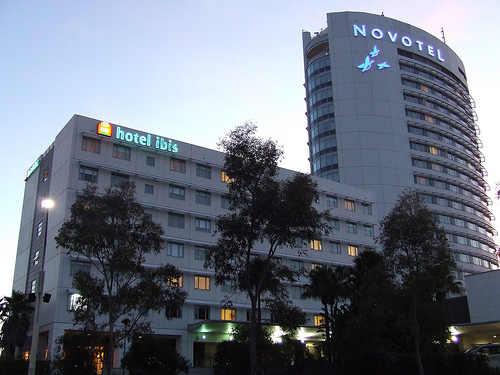 It’s no secret that a flight to Sydney, Australia might be on the extremely long side of the scale. If you’re like me and have trouble getting a good rest on the flight and also have an extended layover (or unforeseen layover) in Sydney, then scoping out the nearby hotels to the Sydney Airport may be a priority. With a quick taxi ride, you can be checked in and relaxing in your private hotel room in a matter of minutes if you choose from the list of hotels below:

Hotels within 3 Kilometers of Sydney Airport

Stamford Plaza Sydney Airport
This 5 star hotel is literally walking distance from the domestic terminal of Sydney airport and a short shuttle ride ($6) from the international. Amenities include a roof-top lap pool, gymnasium, sauna, jacuzzi, concierge and the quieting effects of sound resistant glass windows in all the rooms. The Stamford Plaza Sydney Airport offers 315 guest rooms ranging from standard rooms to suites.

Formule 1 St. Peters
The Formule 1 in St. Peters offers a more basic accommodation option within 10 minutes of the airport. This accommodation is much cheaper, but has few amenities to boast except for air conditioning and pay as you go WiFi access.

Hotels within 5 Kilometers of Sydney Airport

If looking for hotel rooms any further from the Sydney Airport and you might as well just search for Sydney hotels. Have a look at these luxury hotel rooms with a view of the Opera House, too!