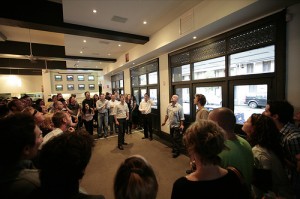 ANZAC Day is a big public holiday in Australia; I would liken it to Memorial Day in the USA since its purpose is to remember the people who served and those who lost their lives in war. Each year on April 25th, there is a parade, veterans dress up in uniform, and after the gathering, everyone heads to the RSLs and select pubs for a morning beer and some games of two-up.

When Australians first told me about the game of two-up, I had no idea of the significance of this game. First of all, two-up is pretty much a gambling game where two pennies are flipped and participants have to guess whether the coins will fall both heads, both tails or one of each. Ok, fair enough… I’ve played this before.

But, did you know that two-up is actually illegal in public on all days of the year except for ANZAC Day in New South Wales? In fact, two-up is considered illegal in most states and territories except for in approved establishments.

One place to play two-up all year is at The Musician’s Club in Broken Hill.

Two-up is known as an ANZAC Day tradition. It goes back to the days where Aussie Diggers in World War I played to pass the time, and it continued on ANZAC Days when veterans would reunite. Because of this, the government sort of looked the other way until finally becoming a legal tradition.

I was quite surprised to read about the terminology involved with a simple two-up game. In the States, we would simply play “heads or tails” and flips the coins. Here, though, Australians have taken that simple game and made it into a proper casino game. Really, a casino in Burswood (near Perth) offers two-up as a table game.

I’m kind of sad that I haven’t gotten around to playing two-up yet, but hopefully that will change this year. There is a legal two-up joint on ANZAC Day just across the street from my apartment.