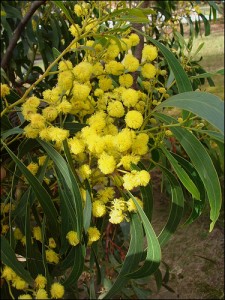 National Wattle Day occurs on September 1st in Australia, which is also the first day of spring down under. It is a day to celebrate the new season, the environment and nature, and it is marked by wearing a sprig of wattle flower.

However, when Wattle Day first began, it was a day to celebrate patriotism for Australia as it became a new nation. It is said to have started in Tasmania on the anniversary of its discovery, but the very first national Wattle Day didn’t make itself known until 1910 when it was celebrated in Sydney. From that time, the significance of the day has changed throughout the years, sometimes drawing its focus on helping to raise money for Red Cross during the wars. After World War I, the focus was on tree-planting and recovery, and some of that focus has influenced the Wattle Day of today.

The Golden Wattle is a tree that blooms bright yellow flowers in August and September. In 1984, it was stated that Australia’s national colors, green and yellow, come from this plant, and in 1984, it was declared a national flower.

There are no big events for Wattle Day as it appears to be more of a day with historical significance. However, there are groups that do sell Wattle Day badges and have dinners in order to raise funds for various organizations, such as the ACT Rural Fire Service.

You can read more about Wattle Day on the official association’s website.