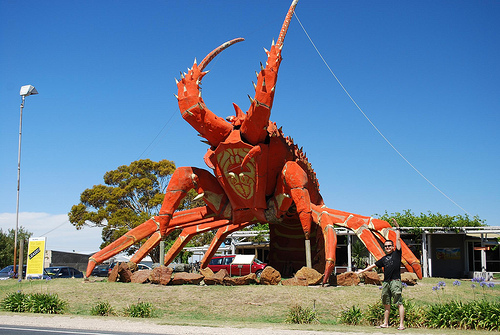 When it comes to giant roadside attractions, Australia takes the cake with their 150 different “big things“. They’ve got giant pineapples, big bananas, huge birds, 3 times life-size sheep and so much more, but this, readers, is really something.

The Big Lobster is a giant, overpowering, and almost frightening sight that lies in the South Australia town of Kingston South East. Really, you can’t miss the thing with it’s giant lobster legs flung overhead. The whole big thing is not only a visual attraction, but it also houses a seafood restaurant downstairs (suiting enough). Oh, and let’s not forget to mention that Kingston is known as a popular fishing and lobster port making it even more suiting of an attraction.

This big thing is so big that it even has its own website.

The story of this big thing dates back to 1979 when it was opened by the South Australia Premier. The Big Lobster has a rather gargantuan size reaching 17 meters tall, 15.2 meters long and 13.7 meters wide, and of course there is a 4 ton weight to back that up. Only, it wasn’t supposed to be this big!

It turns out that the actual construction details for this structure were done in feet (which, as you know, is 1/3 the length of a meter), but the designer in charge took them as meters. Big difference. The entire build process took just 6 months despite the size.

Today the structure has been taken over and converted in a quality dining location featuring seafood, which makes this roadside attraction one to both stop at and grab a quick bite. It’s the best of both worlds: a quirky attraction and a restaurant.