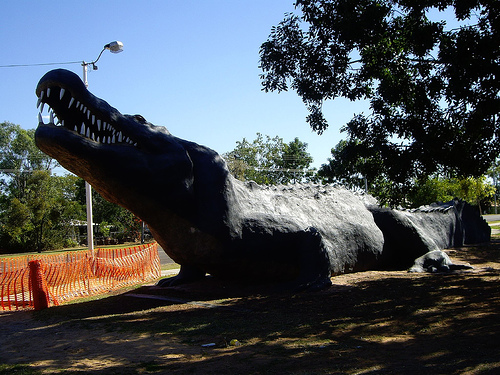 Crocodiles, and we’re talking the fiercely gigantic salt-water kind, have a home in several areas around Australia, especially in the estuaries that surround the area of Wyndham.

Wyndham is the most northern point in Western Australia (3440km northeast of Perth) and is located within the East Kimberley region. As you can imagine, it is a place of intense weather, actually claiming the highest average temperature throughout the entire year in Australia. And, to make it more of an intense place, the area is known to have a croc or two living – and lurking – about.

If visiting Wyndham, the first crocodile you will probably see is the “Big Croc” that lies at the entrance. This concrete croc stands 3 meters tall and stretches 18 meters long (now that’s a big croc!), but at least this one is safe to get up close and take a photo with. The “Big Croc” commemorate the opening of Western Australia’s very first crocodile farm, which is a place that you can visit in order to see real crocs up close, and perhaps even give them a feeding. The Wyndham Zoological Gardens and Crocodile Park lies on Barytes Road and makes for a great family friendly stop, if you happen to be in the area, for viewing the crocs as well as komodo dragons and alligators. It also makes for a great vantage point at looking out across the picturesque Cambridge Gulf.

The “Big Croc” in Wyndham is just one of many of the big crocs in Australia. There’s also the croc located in Normanton, Queensland, as well as the boxing croc in Humpty Doo, Northern Territory to admire as road trip roadside attractions.