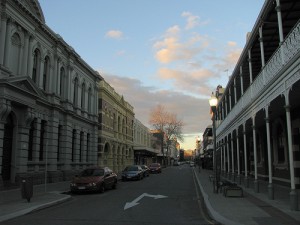 A visit to Australia in August will find you in the last month of winter, and the place to be if in the south is at the mountains while the weather is still ripe for the joys of outdoor sports. Average temperatures seem to warm up a bit overall, but no real changes since July take place.

In the southern states, the tourist droves are not in the summer boom, but finding accommodation in Sydney or Melbourne – hostels and hotels – should always be booked ahead just in case. Tourists that have wandered north to take part in the endless summer experience are having days at beach resorts snorkeling, diving and surfing without any cold weather concerns.

The weather in Australia doesn’t vary much from summer to winter, but it does vary in the winter from north to south on a larger scale. Darwin is a hot place pretty much year-round, so checking the temperatures in the Northern Territory is of less concern than knowing the average range for Sydney.

Darwin Lions Beer Can Regatta
Boats are built by participants using empty beer or cola cans and raced in Darwin. The proceeds from the annual events go to support various Lions sponsored programs.

>> Read more about the Darwin Beer Can Regatta

City2Surf
City2Surf is a 14 kilometer run from the Sydney CBD to Bondi Beach that draws more than 75,000 participants each year.