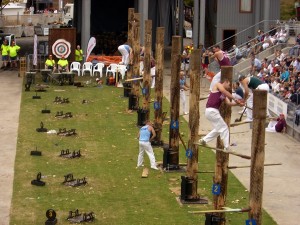 April is the middle of autumn in Australia, so the southern parts of the country will experience typically cooler weather with perhaps a bit of rain here and there. The tropical north, however, will be seeing less rain, which means that warmer weather is now going to be on the bearable side. So, if you have a desire to see the Great Barrier Reef, hike Kakadu National Park or drive up to Cooktown, then now would be the time to start doing it.

Now is also a good time of year to rent a campervan and drive up the east coast of Australia. Since it will be getting warmer as you go north, you won’t have to worry about the winter that is approaching in the south. Many backpackers actually take this route so that they can avoid winter altogether. Campervans can help you save on accommodation in Australia, but if you decide to take a normal rental car, or maybe even the Australia buses, then there are always hostels and hotels wherever you go to book into.

A big shining star in the weather in Australia around this month is the fact that the wet season in the tropical north is dissipating. That means travel become less humid and more enjoyable. The temperatures in Sydney, Melbourne and Perth may be dropping, you’ll find that it really isn’t that cold in Australia.

Anzac Day
Anzac Day is a veteran’s memorial day. It takes place each year on April 25th and features parades and wreath-laying ceremonies. If you head to the pub, it is the only day of the year that two-up is legal.

Freemantle Street Arts Festival
It’s the country’s biggest street arts festival with its main goal of showcasing the busking culture of the area.